In addition to weights samples/observations by the cells volume of the mesh, this class can be given specified nonlinear relationships between physical properties. (polynomial etc.) Those nonlinear relationships are given in the form of a list of mapping (cluster_mapping argument). Functions are added and modified to fill that purpose, in particular the fit and samples functions.

Disclaimer: this class built upon the GaussianMixture class from Scikit-Learn. New functionalitie are added, as well as modifications to existing functions, to serve the purposes pursued within SimPEG. This use is allowed by the Scikit-Learn licensing (BSD-3-Clause License) and we are grateful for their contributions to the open-source community.

List of mapping describing a nonlinear relationships between physical properties; one per cluster/unit. 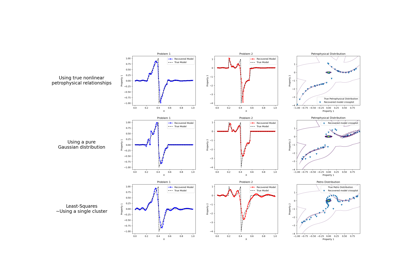